Ray Jordan and Cyndi Segroves hold hands while in their wheelchairs. (Photo courtesy of Jordan and Segroves)

Ray Jordan and Cyndi Segroves, a married couple with facioscapulohumeral muscular dystrophy (FSHD), haven’t let their disability get in the way of anything.

They’ve traveled from their Arizona home to destinations around the world — from Hawaii and New York City, to London and Sydney, from Costa Rica to Cozumel, Mexico. The couple also advocates for disability rights while working full-time — Segroves as a software quality analyst and Jordan as part-owner of a bowling machine manufacturing and supply company.

But what has drawn them together is strong communication, trust, and the desire for independence.

Their openness with each other brought a first connection, even though then 8,000 miles apart, when they met through the FSHD Society Facebook group in 2009. Segroves, 51, had been living in Tucson, Arizona, for the past 20 years while Jordan, 62, was born and raised in Melbourne, Australia.

“We are used to being ourselves,” Jordan said during an interview, along with Segroves. 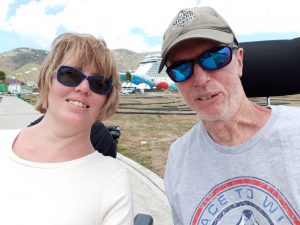 The couple in front of their cruise ship in the Caribbean in May 2019. (Photos courtesy of Ray Jordan and Cyndi Segroves)

The two are as comfortable being apart as they are together, partly owing to previous stretches of long-distance dating and partly to their complementary personalities. That’s what they think separates them from other couples.

“We don’t trample over each other,” Segroves said. “We don’t have any dependencies on the other and have a feeling of equality.”

The way they handle their power wheelchairs, which both received around the same time in 2005, illustrate what she means. Jordan, the Australian, is used to driving on the left side of the road, whereas Segroves, the American, drives on the right. The controls for Jordan’s wheelchair are on the left while Segroves are on the right, allowing them to hold hands while they drive.

Their upbringings were quite different. Jordan was born and raised in Melbourne and had a normal early life by Australian standards, while Segroves moved around a lot as a child. She was born in Tennessee, raised in Texas, went to high school and college in Maine, transferred to Boston then Pennsylvania for work, and finally settled down in Tucson in 1994.

They also took two different routes when it came to their diagnostic odysseys.

Jordan was a competitive athlete in high school and recalled being, while he was “no champion,” certainly “above average.” He was diagnosed with FSHD at 34 years old. Symptoms were evident for years before then, but with no family history of the disease, he didn’t understand why he was losing muscle. Instead, Jordan figured he’d go to the gym and “put it back together,” but when that didn’t happen he went to his doctor and ultimately, in 1993, received his diagnosis.

Segroves’ decline was more noticeable. She was active in her junior high cheerleading group, but started to have trouble with kick lines. Her mother found a Shriner’s sponsor who connected them with a children’s hospital in Dallas, Texas, where they took detailed measurements of her hands, head, and extremities. Without a clear diagnosis, Segroves kept losing muscle strength. She could do backflips in her freshman year of college, and as a sophomore couldn’t stand up from the ground without help.

At that point, doctors performed a muscle biopsy. The typically 30-minute procedure required three hours for surgeons to find sufficient muscle in Segrove’s leg. All in all, she waited about two years before being diagnosed at age 15.

That diagnosis was what brought the two together. Segroves reached out and connected with Carol Perez in Boston when she found out she had FSHD. Perez’s son, Daniel Perez, would go on to co-found the FSHD Society (formally known as the FSH society) and Segroves attended some of the organization’s patient meetings.

Segroves also got involved in the local community, chairing the Tucson city Commission on Disability Issues and writing articles about disability for a local, online newspaper. When she put out a Facebook friend request to members of the FSHD Society Facebook group, Jordan was one of the first to accept and comment on her writing. The two started chatting, using services like Facebook, Yahoo messenger, and Skype, avoiding the high cost of long-distance phone calls.

“Our relationship was built on communication,” Segroves said. “We really got to know the person first.” Ray Jordan and Cyndi Segroves in Melbourne, on a bridge over the Yarra River, in December 2011, days before their engagement.

That openness led to trust, and now they are perfectly fine being apart — Jordan visiting his “friends that are girls” and Segroves visiting her “friends that are boys.” Because of the FSHD connection, most of the couple’s friends already know each other.

Segroves and Jordan surmount travel obstacles in part due to their problem-solving capabilities, another shared trait and initial attraction. Living with FSHD often means coming up against problems that need solutions — for example, arranging hotel rooms with enough space for them to navigate their power chairs, or meeting with management to ensure they have handheld shower heads at a level they could reach.

When they were dating and coming together from different parts of the world, they would meet each other halfway — like for their third date in Hawaii. Whoever got there first was responsible for “scoping out the room,” and making sure the accommodations work for their abilities and large power chairs.

Now living in Tucson, they still share reconnaissance duties. Jordan’s work commitments in Australia, however, can force them apart for months at a time. It took the COVID-19 pandemic to bring them together at home for the longest period of time in their relationship — a year and counting.

The two travel as much alone as they travel together, with Jordan typically taking a 16-hour flight to Melbourne one to two times a year for work. They are perfectly content doing their own thing. Whether alone or together, Jordan and Segroves often have to explain themselves to airport personnel. “Are you traveling with anyone?” is a question Segroves has been asked so often she’s got a ready retort, similar to others the couple throw back and forth at each other: “I don’t know, but I’m sure the plane’s full of lots of people.”

Advocates for the community

Advocacy has been a big part of both of their lives, yet most of what they do here is separate. One exception, before they got engaged, was at a Tucson city council meeting, when Jordan joined Segroves as she spoke against raising public transit rates for low-income residents and those with disabilities.

Privately, they also meet together with managers or others who can better pave the way for people with disabilities.

“If [something] is going wrong, it must have gone wrong for other people,” Jordan said.

Jordan is busy chairing and hosting Zoom meetings for the All Aboard Network in Australia, which pushes for more accessible public transportation in the country. Segroves is part of her software company’s employee resource group for abilities network.

While self-starters who operate quite independently, they are always happy to be in each other’s company.

“I like hanging out with you,” Jordan said simply, and with a smile, to Segroves.